John F. Parker, Jr., is a founding partner of Phillips Parker Orberson & Arnett with offices in Louisville and Lexington, KY, and Key West, FL. Parker operates Sail On Charters, a high-performance sailing company in the Florida Keys and creates private charters for friends, family and business associates. Sail On Charters is owned and managed by Sail On Captain LLC, a Florida limited liability company. 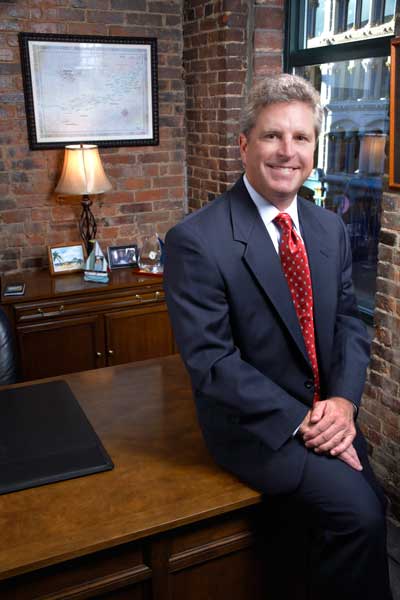 Parker is an accomplished trial lawyer who has tried over 50 cases to jury verdict. His practice includes all aspects of civil litigation. John holds the Martindale-Hubbell AV preeminent rating by his peers in ethics and legal ability. John is also recognized by Best Lawyers and Super Lawyers.

John is admitted to practice before all trial and appellate courts in the Commonwealth of Kentucky and the state of Florida as well as the United States District Courts for the Eastern and Western Districts of Kentucky. John is a member of the Louisville, Kentucky, Monroe County, Florida, and American Bar Associations. He is also a member of the Defense Research Institute and the Kentucky Defense Counsel.

In 2015, Parker re-launched Sail On Charters, a high-performance sailing company in the Florida Keys. Sail On Charters is owned and managed by Sail On Captain LLC, a Florida limited liability company.

Sail On’s cruising grounds span the Florida Keys from Miami and Biscayne Bay to Key West and the Dry Tortugas. Periodically, Sail On can be found in the protected waters of Tampa Bay and in satellite bases in the Abacos.

Sail On Charters completed its inaugural two-week sail in July 2015 as part of Regatta Time in Abaco. It continued its 2015 and 2016 seasons with sails to the Dry Tortugas and Newfound Harbor, as well as day sails along the Florida Keys. As Sail On entered the 2017 sailing season, its destinations included the Dry Tortugas, day sails in the Keys and another trip to Regatta Time in  Abaco.

John is the proud father of two beautiful and accomplished daughters, who, like their father, enjoy adventure and the outdoors. John’s passion is sailing. He is a United States Coast Guard licensed captain and has sailed throughout the Florida Keys and Bahamas over the last twenty years, having crossed the Gulf Stream more than a dozen times.

He is a member of the Castle Harbor Sailing Club in Coral Gables, Florida and is a former Commodore and current member of the Louisville Sailing Club. Other interests include reading, photography and scuba diving.